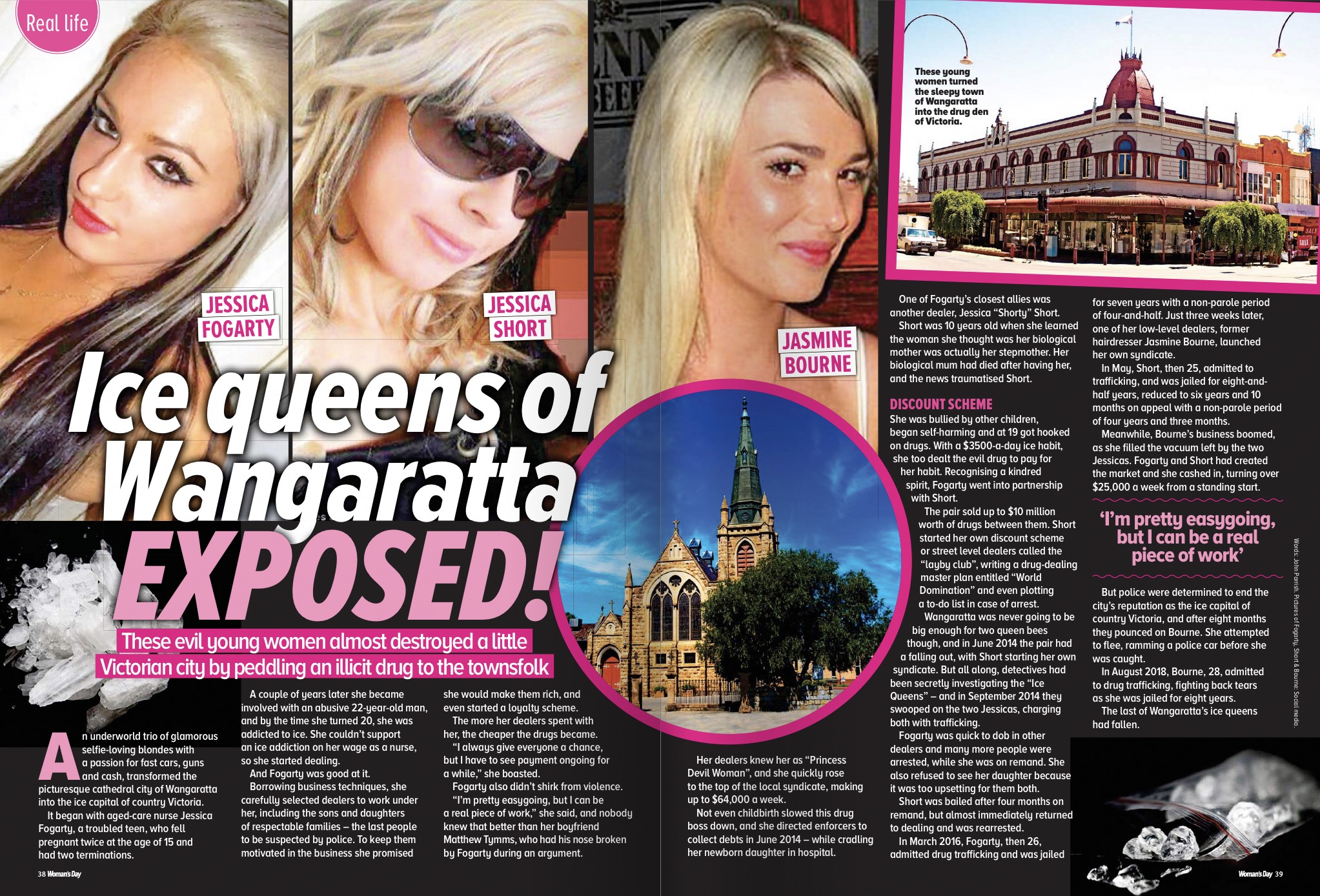 What a stroke of luck for Australian editors that three winsome blondes have been jailed for dealing methamphetamine in the same city. But the Woman’s Day exposé on Wangaratta’s ‘ice queens’ (an irresistible term also used by the Herald Sun and The Age and The Daily Mail a few months earlier) reads like a straight-to-DVD telemovie script.

The salaciousness is piled on thick: “An underworld trio of glamorous selfie-loving blondes with a passion for fast cars, guns and cash, transformed the picturesque cathedral city of Wangaratta into the ice capital of country Victoria,” it begins. (Incidentally, other ‘ice capitals of country Victoria’ – as defined by the media or politicians – include Shepparton, Sale, Hamilton, Horsham, Geelong and Warrnambool.)

That juxtaposition between the bucolic setting and an Underbelly-style plot line serves to create an us-and-them divide between normal, god-fearing, law-abiding folk and the female dealers. It’s reinforced with the women luring in “the sons and daughters of respectable families” and the kicker beneath the headline, which reads: “These evil young women almost destroyed a little Victorian city by peddling an illicit drug to the townsfolk.”

Actually, in June this year, Victoria’s Minister for Mental Health, Martin Foley, visited the ‘townsfolk’ of Wangaratta (population 28,310) to announce the construction of a residential rehabilitation service. On the website of the Premier it is noted that while rural and regional Victoria has faced increased challenges around ice use, “alcohol remains the primary drug of concern and causes the highest number of drug-related ambulance call-outs in Victoria each year”.

Yet, as AOD Media Watch continues to demonstrate, alcohol is far less sexy to journalists than methamphetamine. Ice is an easy lever with which to create moral panic because of its illegality, and because – as a result of that illegality – it is associated with more criminal behaviour and harms at its most pointy end.

As AOD Media Watch’s own Katie Horneshaw wrote back in 2015 for Junkee, the first major dealers of ice in Wangaratta were arrested in a police operation back in 2012, so the idea that this female trio in 2018 was responsible for bringing ruin upon the town is inaccurate. By the same token, nor will ice use be banished from the town for all eternity now that – as the closing sentence has it – “The last of Wangaratta’s ice queens had fallen”.

The author of the article, John Parrish, acknowledges some of the hardships and trauma that the women in this story endured from a young age (we won’t do the same and republish Jessica Fogarty’s medical history here). And yet, he casts them as ‘evil’; or, at least, someone at Woman’s Day inserted ‘evil young women’ into the introduction. Within the main copy, too, methamphetamine is referred to as ‘evil’.

To portray a drug as evil (let alone a person) has a well-established consequence of creating stigma that shames those using the drug into not seeking treatment, as well as stigmatising the families. According to Australia’s Alcohol and Drug Foundation, stigma can’t be overstated in its contribution to social exclusion: “Stigma is often used as a tool to discourage and marginalise people by highlighting behaviours others see as ‘unhealthy’, or not being ‘like us’ … It’s well recognised that stigmatisation is a barrier to seeking help.”

The three women in the story didn’t just use methamphetamine, they dealt it. By the journalist’s own admission, at least two of the three did so because they themselves were addicted. Perhaps, then, it would have been worth mentioning the lack of facilities to treat addiction in North East Victoria. In fact, the first State Government-funded residential rehabilitation service in the area won’t be operational until 2021.

Women involved in drugs make for particularly lurid and inappropriate headlines. We need only think of the coverage of the triple murder of Adeline Yvette Rigney-Wilson and her children. Woman’s Day sister magazine Women’s Weekly ran with the headline: ‘Children murdered in SA went hungry as slain mother put ice habit ahead of her family’, diverting focus from the brutal act committed by Rigney-Wilson’s partner, Steven Peet.

Unfortunately, as long as stories such as this in Woman’s Day are published, change will be an uphill battle.