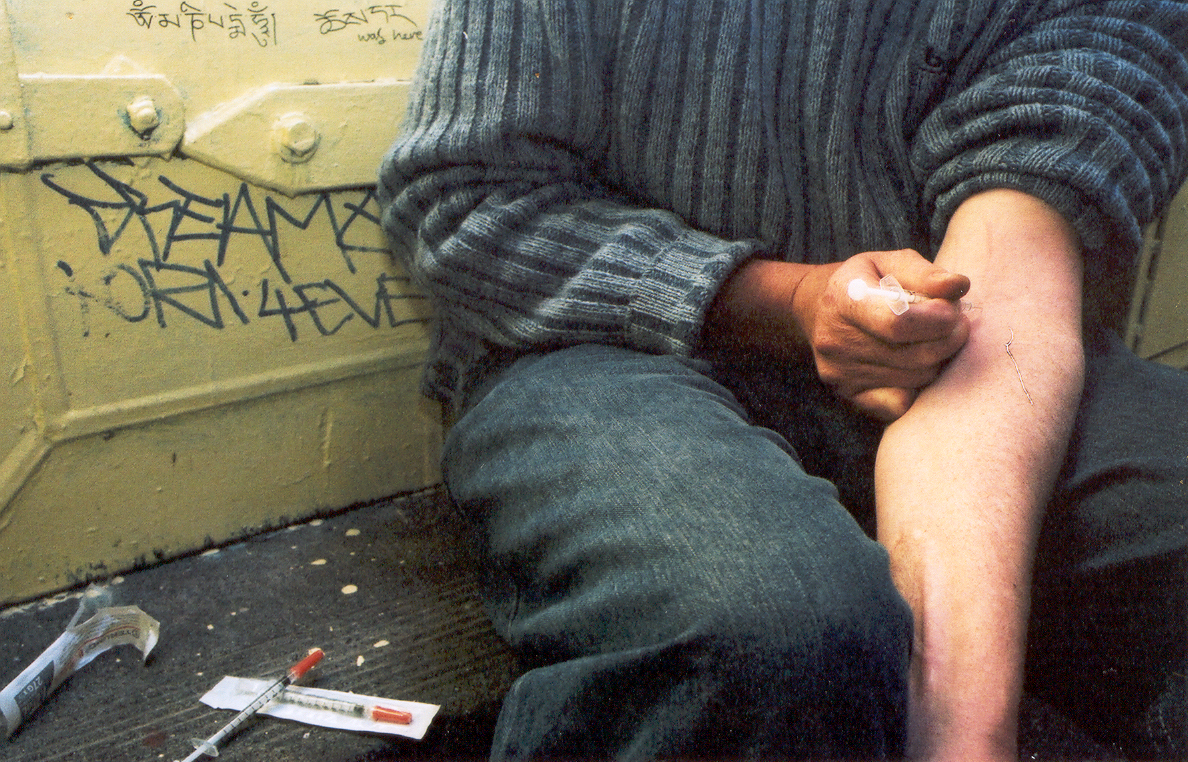 A Shot In the Heart. Our drug crisis laid bare’ was the headline on the front page of Sydney’s Daily Telegraph on the 28th of April.

A large photo took up most of the page of a bedraggled man injecting drugs while sitting on some steps. The discussion continued on some inner pages (4-5). An online version of the piece (originally titled ‘Junkie Shame on Sydney’s Streets’) can be found here.

The caption under the front page photograph says ‘Filth, caked and clasping a syringe like a surgeon, a wretched junkie has laid Australia’s drug crisis bare on the streets of Sydney’s CBD’. The text goes on: ‘In appalling scenes at the height of yesterday’s morning rush hour, the dead-eyed addict spent 10 sickening minutes in the gutter of a Surry Hills lane trying to inject himself, oblivious to Sydney siders walking past him on their way to work’. Police Minister Troy Grant labeled the images captured by the Daily Telegraph as distressing and disturbing: “At 9 am in broad daylight, people should feel safe to walk to work without being confronted with such a horrific scene’ he said.”

The way in which the man is labelled a ‘junkie’ and ‘dead-eyed addict’ only perpetuates the marginalisation of an already socially isolated population. Such stigma limits the ability of people to integrate into society. Many readers will interpret the description of the man as an indication that his circumstances are a typical result of using illicit drugs. For the members of the public who don’t inject drugs, this accentuates an ‘us-versus-them’ divide.

Many members of the community will agree with the NSW Police Minister that they feel confronted when encountering someone injecting drugs in a public place. After all, people dependent on alcohol have a somewhat private place that they can go to when they want to have a drink. It’s called a ‘pub’. Why doesn’t the community also provide places where people who wish to inject illegal drugs can do so? At present, Australia – a country with an area of 7.5 million km2 – has only one place such where people can inject drugs under supervision: the Kings Cross Medically Supervised Injecting Centre. This centre, opened in 2001, has been evaluated independently about a dozen times with multiple and major positive findings but only few and minor negative findings. Why, when the need to do something effective is so great and the benefits of a Medically Supervised Injecting Centre are so well documented, has Australia failed to establish any more Medically Supervised Injecting Centres in the last 16 years?

If Australia had started a quarter century ago reforming its drug laws and carrying out a heroin trial, the bedraggled man in the photograph may well by now have been leading a normal and useful life, looking after his family, working for a living and paying his share of taxes. The exploitation of the man in the Daily Telegraph photo perpetuates the marginalisation of people who use drugs and further limits drug policy debate in Australia.