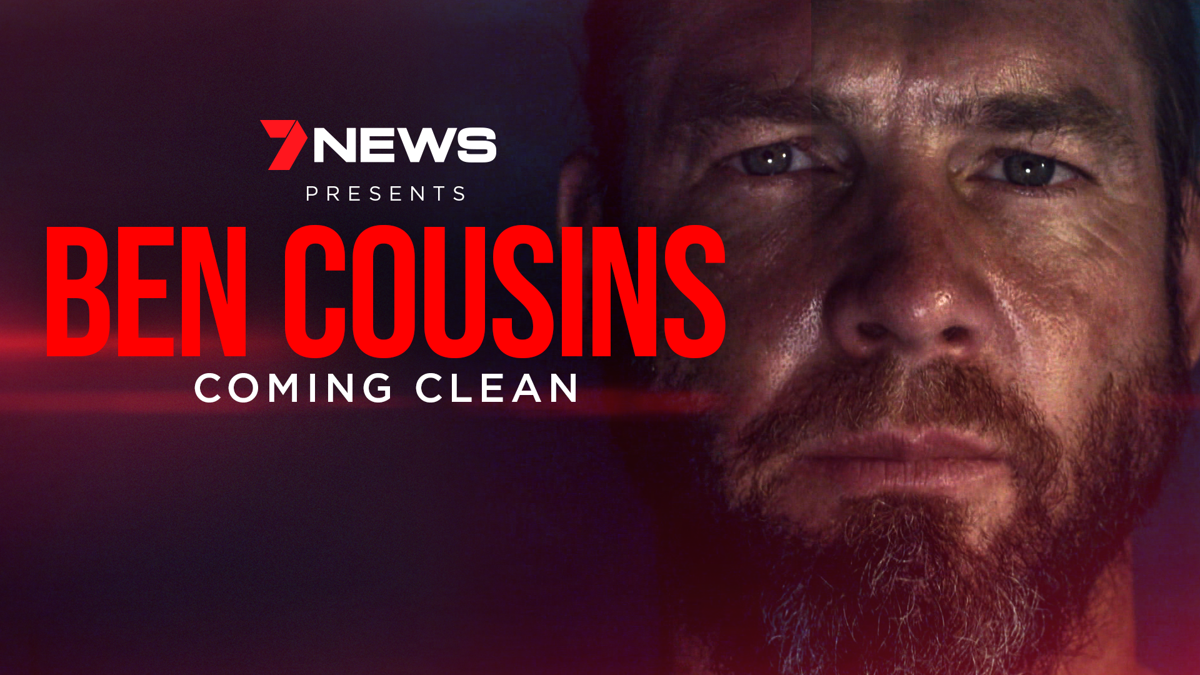 On the evening Sunday the 29th of March, Channel Seven aired a one hour program about former AFL player Ben Cousins called “Coming Clean”. In the opening sequence, the audience is greeted with footage of Ben from ten years ago, polished and media-trained. “I hope this documentary can send a powerful message about how addiction affects your life,” he warns, before the camera cuts dramatically to Ben in 2020. It’s a shock. He stares straight at the camera, media-friendly smile wiped away, visibly aged, a long beard and shaggy ponytail obscuring much of his face. He croakily finishes the spiel that former Ben began: “But I feel there are some real lessons to be learnt here. And I think some good can come from it, for everyone”

If there was any hope that Seven might at least aim for objectivity in what was promoted as a “documentary”, it’s lost within these first few frames. Ben’s decades of struggles are whittled down to a spectacular opening sequence which frames the documentary’s central theme: Ben Cousins, the AFL star turned jobless, criminal, addict.

“Brownlow to garbo, inside a jail”, Basil Zempilas contemplates at one stage, with pantomimed disbelief.

Still, the piece could have functioned as a legitimate cautionary tale, had there been some attempt by Seven to contextualise Ben’s journey within a framework of punitive drug policy, stigma, the pressures of fame, and party culture; or to educate viewers on how one might reduce the harms that Ben has endured in their own lives. Instead, Ben Cousins is trotted out like a wind-up monkey and his sad story reduced to spectacle.

How is addiction misrepresented?

Seven should be commended for including an interview with psychologist and drug expert Carol Daws. She rarely gets it wrong, but unfortunately, her assertion that: “The reality is, no matter who you are, if you use meth often enough you will become addicted to it. It is very powerfully addictive,” perpetuates the myth that methamphetamine is somehow more damaging or addictive than other drugs.

Meth addiction has been labelled an “epidemic”, and meth as a drug which can turn people into zombies. The Seven journos appear to have these mischaracterizations in mind as they harangue Ben over his continued use. Zempilas asks: “Why did you feel the need to use drugs while you were playing footy?” “Why didn’t what happened to (Ben’s deceased teammate) shock you straight?”

And, over and over again: “Are you still using? It’s a simple question!”

It’s hard to watch. Ben is visibly uncomfortable at the relentless line of questioning, struggling to answer. Finally, he offers:

“I don’t want to go there. I don’t think it helps. I haven’t used today, and that’s gotta be enough for me and it should be enough for other people.”

Like many people experiencing an addiction, Ben’s wish to recover might have been hampered by factors which have little to do with his particular drug-of-choice. These include: the anticipation of being stigmatised and judged by health professionals, lack of appropriate services, the expectation of abstinence and fear of painful withdrawal syndrome, or mental illness such as depression.

By ignoring these factors and instead implying that people like Ben continue to use because they are immoral and selfish, Seven is willfully reproducing a damaging myth that has historically been used as an excuse to stigmatise and mistreat people with addictions. In using the reach of its platform to spread misinformation and increase harm, Seven failed in its journalistic responsibility to to limit harm and protect its audience.

In one scene, Ben gesticulates wildly at a producer as dramatic music plays in the background. “Of course meth calms me down!” he yells. The producer is shocked: “I thought it puts you up.”

Not only is the scene used to portray Ben as an aggressive monster, it’s clearly positioned to show him “lying” about what meth does to him. Yet for many people, amphetamine does have a “calming” effect because it helps them to focus and stay centred on a task. The idea that meth always renders people wild and speedy is another myth and another cause of stigma. Had the producers consulted with more than one expert, or with people with lived experience of addiction, they might not have perpetuated these myths.

Where did they go wrong?

The scene in the car should have been cut. Ben seems visibly unwell, as he angrily describes not being allowed to see his children, and eventually he threatens physical harm:

I’m sure Ben would have preferred to keep the footage off the air, but there are concerns beyond that: Ben’s reference to father’s rights could be viewed by some as promotion of a sometimes-hateful cause, or as apologism for violence against women.

Seven’s piece contributes to a culture that portrays drug use as a one-way ticket to hell, and people who become dependent as self-indulgent monsters. Airing it was not in the public’s interest, as evidence shows sensationalism is not effective in preventing drug use. However, it does discourage people with drug-related issues from seeking treatment and could directly impact their mental health.

It will also discourage people with a substance use disorder from speaking with the media, preventing their valuable and necessary perspectives from being heard.

There is also an argument to be made that Ben could not properly consent to this story. Seven wielded all the power in the negotiation, and, due to Ben’s apparent need for financial support, they could have probably asked him to do just about anything in return for cash. The result is a “documentary” where Ben is humiliated, culminating in the “big reveal” – that he is homeless. I hate to imagine what Ben felt watching the fully-edited and scored story back.

Where did they get it right?

Though unhelpful at times, Carol Daws, the psychologist interviewed, adds some sorely-needed balance:

“For someone who is addicted they would have to use more of that substance just to feel normal.”

Although not always the case, this at least provides some perspective to the audience that Ben is not necessarily seeking to get high.

The sections with both Lynn McGranger and Nic Naitanui provide a very welcome dose of compassion and understanding. Both speak eloquently about addiction and present clear examples of attitudes which are not stigmatising. “I can understand why footy players have their vices.” says Nic Nat.

Ultimately, “Coming Clean” does present a cautionary tale, though not the one that Seven had envisioned. What comes across, is a cautionary tale of the harm that the media can do to the community when it chooses to promote stereotypes and misconceptions for the sake of ratings.

One of the final scenes sees Ben padding down the footpath toting his large duffel bag of belongings, obviously homeless and apparently sleeping rough. Watching it, a sharp pang of sadness hits me. In a single frame, Ben’s pain and humiliation are laid bare, writ large through the tools of TV; his worth reduced to that of an hour of sensationalised TV and a few thousand dollars. And as we all change the channel, Ben is to be left with his duffel bags and his life, and Seven with their profits.

Basil Zempilas from 7News was contacted for comment but did not respond prior to publication.

Journalist Katie Horneshaw presents a sobering response to the Ben Cousins documentary which aired on Channel 7 on Sunday 29th March. Given her critique of some of my comments, I feel compelled to respond. My name is Carol Daws, CEO of Cyrenian House and Psychologist. I was featured in the Ben Cousins documentary to discuss some aspects of alcohol and other drug use. It seems that Katie and I don’t disagree on much regarding the interview with Ben Cousins. In particular, we both agree on the critical issues of stigma and discrimination, the pressures of fame and the importance of highlighting myths around drug use and related harms.

Unfortunately, in the media’s desire to get a story across about an individual or a group of individuals, the message can sometimes take a back seat to the story, particularly if it has the potential to be sensational. The Ben Cousins documentary was no exception. Having known Ben for many years, it was very difficult for me to watch and left me with deep feelings of sadness.

In my role I am often approached by the press to give comment on stories around alcohol and other drug use. I rarely respond affirmatively. In addition, I would more often than not, advise a person with lived experience to avoid media interviews. There are often many unintended consequences of exposure of one’s alcohol and other drug use in the media. When the media interviews anyone, they edit the interview in such a way to make a point – or simply to fit the allotted time. Sadly, the end result is often lack of context, misrepresentation or, at the very least, not the whole story. As a journalist Katie, you would be aware of this. On this particular occasion, my interview was conducted in parallel to the interview with Ben and it is important to note that I was not present during any part of the filming with Ben. My comments were woven into the interview and were not necessarily related to the context of Ben’s interview.

My comment about the addictive nature of methamphetamine was in response to a question about the nature of that particular drug. It was in no way suggesting that one drug, or another, was somehow more addictive or more damaging than another drug – I simply don’t ever say this. But the potential for editing impacting on what I appear to say was not taken into account by a journalist who knows how stories are created in the media. Katie, for you to make a judgement about a singular comment and imply from this, things that I did not say, is unhelpful. Further, to draw an analogy of my comment to your later assertions regarding the way the media portrays methamphetamine use as an “epidemic” and turning people into “zombies”, is unfair. I did not say that. I did not imply that. I never say that.

People who use alcohol and other drugs are amongst the most discriminated group of individuals in our society. Sadly, the media is responsible for creating or communicating a good proportion of the stigma experienced by alcohol and other drug users. This is particularly evident in times such as these with the COVID-19 pandemic. It is a very difficult time to be out there in society during this time of isolation as an individual with an alcohol and other drug issue, who may or may not, also be experiencing mental illness. In my field, we work really hard to ensure people struggling with alcohol and other drug use issues have a range options to support them, including, but not limited to abstinence. My staff have continued to offer services to our consumers during this difficult time to ensure that this group of people are not further marginalised.

Alcohol and other drug use and associated behaviours are often the source of significant stigma. This stigma can often be a barrier to treatment seeking behaviour. I feel that a more media balanced approach towards individuals with alcohol and other drug issues may in some way contribute to reducing said stigma and work to encourage more individuals to seek help. In this Katie – we agree.